Kathleen M. Cashin was elected by a joint session of the Legislature to the Board of Regents to a four-year term representing the 2nd Judicial District. 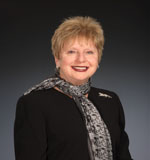 Regent Cashin has served the students of New York City with distinction for over 35 years as a teacher, staff developer, reading consultant and program manager. Regent Cashin was a teacher at Holy Innocents School and P.S. 299, and served as principal at P.S. 193 (The Gil Hodges School) where her expertise in school leadership and her compassion for staff and children enabled her to successfully lead for 16 years. Regent Cashin was superintendent of Community School District 23 in Ocean Hill and Brownsville where her ability to lead supervisors, foster professional growth, and engage parents and the community were reflected in the educational resurgence of the District 23 community. As Regional Superintendent for Region 5, Dr. Cashin’s work resulted in the greatest growth over three years in both literacy and math.

Dr. Cashin was named “Distinguished Educator of the Year” by the New York City Association for Supervision and Curriculum Development, and served as a member of the Deputy Chancellor for Teaching and Learning’s senior team, which was responsible for successful instructional changes across the City. In addition, Dr. Cashin served as CEO of Knowledge Network Learning Support Organization. Regent Cashin’s educational background includes a Bachelor of Science Degree in Education from Brentwood College, a Master of Science Degree in Education from Brooklyn College and a Professional Diploma and Doctorate from Fordham University.Regent Cashin was an adjunct professor at Brooklyn College and is currently a clinical professor at Fordham University.

Dr. Cashin has dedicated herself to educating children and ensuring that every child receives an equal opportunity to develop into a contributing member of society. Regent Cashin extends her commitment to students and learning at all levels though her service on the Board of Regents.

Zakiyah Ansari is the Advocacy Director with the New York State Alliance for Quality Education (AQE), the leading statewide organization that has been fighting for educational equity for the last decade. Zakiyah resides in the East Flatbush neighborhood of Brooklyn, NY. She is also the mother of eight children, all who have or are currently attending public school. Zakiyah was a parent volunteer with AQE for over six years before she became employed by them. She was an active parent volunteer in her children’s PTAs and is a founding parent leader with CEJ.

Zakiyah has been invited to speak before parents, educators, elected officials, and administrators about the importance of organizing parents and communities in schools. She is one of the parent voices in the film, Parent Power, produced by the Annenberg Institute for School Reform.

Zakiyah is one of the co-initiators on a recently formed national grassroots movement, “Journey for Justice,” an emerging alliance currently composed of grassroots community-based organizations from 18 cities across the United States representing constituencies of youth, parents, and inter-generational organizations who have been impacted by the closing, turnaround, and charter expansion of schools in communities of color.

Zakiyah was most recently interviewed in an article in the February 2013 edition of American Prospect, “Pushing Arne Duncan Fast Forward.” She also appeared in January 2013 on MSNBC’s weekly national program, Melissa Harris-Perry, and was a panelist on the City & State and Schoolbook panel, “On Education,” in November 2012.

Dr. Aurelia L. Curtis is the Principal of Curtis High School.  Her appointment in July 2003 was historic on two levels.  She was the first African-American to be named as principal of a high school on Staten Island and the first female principal of Curtis High School in its more than one hundred year history.  She encapsulates her message to students and staff in three foundations that all members of the school community embrace and strive to fulfill ~ ATTITUDE, ATTENDANCE, and ACHIEVEMENT.  During her tenure, Curtis High School has been recognized for its success in challenging and supporting students to pursue college education, including the College Board’s coveted Inspiration Award.

Dr. Curtis is involved in a number of community-based organizations.  She was selected to represent the United States as a Japan Fulbright Memorial Scholar. She is the recipient of many awards and recognition for her service to the community and contributions to education.  She received her undergraduate education from the University of Liberia and graduate education from Columbia University (Teacher’s College) and St. John’s University.

Aurelia is married to Alfred B. Curtis, Jr.  They are parents of three children, Al, Tiffany and Gillian who give her a new reason each day to want to be a good teacher, a caring mother and a trustworthy friend.  Aurelia believes that if she “can help somebody along the way, then [her] living will not be in vain.”

Catalina R. Fortino, vice president for education at the United Federation of Teachers and the director of the UFT Teacher Center, brings to her role broad experience in professional development, curriculum, assessments and program development to advance the teaching profession. Catalina received her B.S. in Early Childhood Education and her master’s degree in Special Education and Bilingual Education from Queens College. She also studied Curriculum and Teaching at Teachers College.

Through her work as the Director of the UFT Teacher Center, Catalina has designed professional development citywide structures to implement a comprehensive approach to the Common Core Learning Standards. As vice president, she is one of the lead negotiators with the Department of Education on the new teacher evaluation system. She helped spearhead the union’s efforts to effectuate a framework for assessing teacher practice that is supportive and developmental Additionally, Catalina has distinguished herself as an expert in school reform for high-needs schools throughout New York City. Currently, she provides professional support for transformation, restart and focus schools.

Joseph P. Viteritti is the Thomas Hunter Professor of Public Policy and Chair of the Urban Affairs & Planning Department at Hunter College. His most recent of ten books is When Mayors Take Charge: School Governance in the City (ed.) (Brookings Institution Press). In 2008 he served as Executive Director of a Commission on School Governance, which was appointed by Public Advocate Betsy Gotbaum at the request of state legislative leaders in anticipation of the renewal of mayoral control of the schools. Earlier in his career, he served as special assistant to the Chancellor of Schools in New York, and as senior advisor to the school superintendents in Boston and San Francisco. He is presently working on a book about Mayor John Lindsay of New York, which will be published early next year.

Need help with the Commons? Visit our
help page Send us a message
Skip to toolbar

Built with WordPress | Protected by Akismet | Powered by CUNY